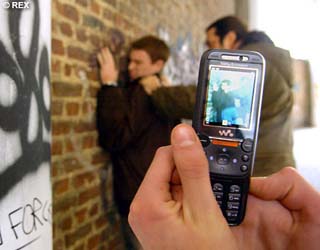 It’s a classic scene: the bully taunts then shoves the victim. The surrounding crowd of people does nothing, perhaps averting their eyes or watching in fascination, maybe walking more quickly to avoid the situation. This is the bystander effect in action.

Why? Why does no one intervene to stop the violence? Decades of social psychology research suggests the answer is a diffusion of responsibility. Research by Bibb Latane and John Darley clearly demonstrated that as the number of bystanders increases, the likelihood that any one bystander will help a victim decreases, that an individual’s sense of responsibility is diffused across the crowd. This phenomenon is seen even in small crowds: where there are only 2 or 3 bystanders, each is less likely to respond in a situation of violence, crime, or emergency than if they were the only other person present. It appears to be due to an uncertainty about how to respond, about who is in charge, and perhaps a reluctance to act when no one else is acting, to be different or stand out in the crowd.

In most of these situations, the bystanders are strangers: people who just happen to be on the scene. This is not always the case: the Kitty Genovese murder in New York, where watching neighbors failed to act in time to save her, has received much attention (and exaggeration) in the media.

But bullying behavior takes place over time and in a community context: in a school, one’s place of employment, or one’s neighborhood. It usually includes bystanders. In fact, bullying has been redefined by researchers Twemlow, Fonagy, & Sacco as a triad: the bully-victim-bystander relationship. The bully, bystanders, and victim all know each other, and the bystander is an integral component in this relationship. Does the rationale for the bystander effect, diffusion of responsibility due to uncertainty or not wanting to be different, still apply in the situation when we know the people involved and the bullying events take place over time?

The bystander effect in a bullying situation has been attributed to a myriad of other causes (for example, see lists of reasons for school and workplace sites). But there is a growing consensus in the research community. The bystander co-creates the social context that allows the bullying behavior to flourish. All members in this context have some responsibility for what happens, but focus on the bystander role (rather than that of the bully or victim) and their understanding of how their behavior maintains the situation is key to changing it. Jim Garbarino speaks eloquently on the issue from the perspective of a too-small Circle of Caring. Hoover and Milner talk about bullying as rituals of humiliation and exclusion. Peter Fonagy talks about loss of mentalization, the awareness and assessment of the mental states of self and others, thus making the victim "not one of us."

Fonagy and his colleagues have developed a four-part program, Creating a Peaceful School Learning Environment (CAPSLE), applying the research findings to the school as a system and building skills in all youth and adults in that system. The program acknowledges that a social climate that allows bullying is co-created by the bully, victim, and bystanders, and thus all must change to correct the problem. Youth, who will often need to deal with the situation without the intervention or support of the teacher or adult coach, need skills and responses they can immediately call on. Developed over the past two decades and tested in a number of elementary schools in the Midwest, CAPSLE addresses:

CAPSLE doesn’t completely eliminate the issue of bullying, but it does result in a significant reduction in the number of victims, attitude changes that were less accepting of aggression and more empathetic toward victims, and positive behavior changes in bystanders. Earlier pilot versions of the program also noted improvement in grades and test scores as well as reduction in the school dropout rate. But these changes didn’t happen over night. Changing a system and the social climate takes time and ongoing effort.

Lickerman in his recent essay brings in the concept of "dependent origination"—that we are all in this together, whether we like it or not. He notes that the key to reducing the bystander effect is getting others to each feel personally responsible for helping to solve a problem they may not consider their own. That is a role we each can and must play. As our communities and relationships continually change, we must be ever vigilant in monitoring our social contexts, recognizing that the role of bystanders is an active and powerful role that can facilitate or ameliorate social violence and bullying in our society.

P.S. Want to know how to reduce the bystander effect in strangers? Victims and Good Samaritans needing an assistant are both counseled to quickly examine the crowd, find a friendly or caring face, look directly at that person, and give them a specific order. Something like "Call 911 and request an ambulance." Bystanders tend to respond to direct eye contact and a direct request.